NO ADMITTANCE MUST BE ALLOWED - this truly is a coordinated invasion and if the United States allows these individuals into the Country…. quite frankly….It Will Never End. 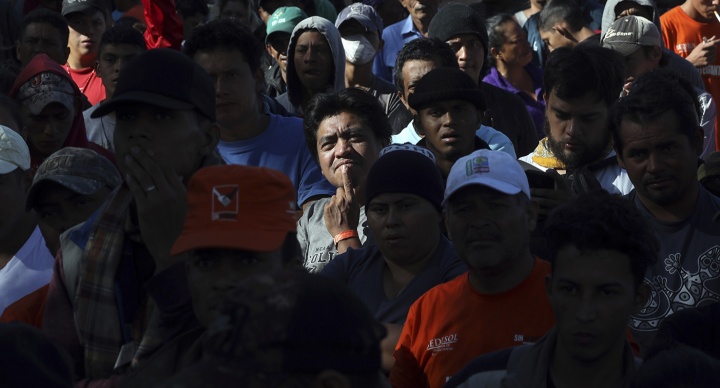 One does not travel this distance just HOPING to get in - and if they did - ‘IT IS ON THEM’. And, if they were lied to (which now a commonly stated excuse) then, their well-being is on the liars - those who lied to them - not the American People.

Enough - no admittance!!! Make your asylum game playing claims and wait in Mexico for those claims to be heard before a Judge. And for those entering illegally - process with photo’s and fingerprints and QUICKLY put them right back over the border they just utilized.
PRESIDENT TRUMP - No Admittance - period!
Ruthie

Juan Manuel Gastelum said there were 2,750 migrants from the caravan in Tijuana and that estimates by Mexico’s federal government indicate the number could approach 10,000. “No city in the world is prepared to receive this — if I’m allowed — this avalanche,” he said during a news conference at City Hall. “It is a tsunami. There is concern among all citizens of Tijuana.”
OUR PRESIDENT’S response/twit……
President Trump: “Isn’t it ironic that large Caravans of people are marching to our border wanting U.S.A. asylum because they are fearful of being in their country — yet they are proudly waving … their country’s flag. Can this be possible? Yes, because it is all a BIG CON, and the American taxpayer is paying for it,” he said in a pair of tweets.

Despicable comments from One and Nothing but Silence from the Other.
Where is ANY Republican politician discussing the daily ongoing invasion and the current designed invasion (caravan) at our southern border and what to do about it?
I AM TIRED of hearing nothing except asinine, despicable and disgusting comments from progressive liberals likes Kamala Harris and Cohorts – who compared ICE to the KKK - who constantly use the Racist/Nazi narratives, etc. - UNBELIEVABLE!
FEARFUL - They should be…. Only those committing crimes fear enforcement… and for those playing asylum games or entering illegally – they SHOULD BE AFRAID… they are breaking our laws.
BUT…
Where is any Republican standing up with comment and a solution?
Where is any Republican standing vocally with the President?
Where is the support for ending illegal immigration and building the wall from the President’s OWN PARTY?
Silence Silence Silence and I AM TIRED OF IT!!!!!
When are ANY Politicians from ANY Party going to stop with the lawlessness nonsense and start representing the best interests of Americans – those they are suppose-to-be representing.
Ruthie
https://www.foxnews.com/politics/kamala-harris-under-fire-after-comparing-ice-to-kkk?utm_source=feedburner&utm_medium=feed&utm_campaign=Feed%3A%20foxnews%2Fpolitics%20%28Internal%20-%20Politics%20-%20Text%29&utm_content=Yahoo%20Search%20Results

It Seems We Have…. regarding our southern border and the pending INVASION in play… that ‘WE THE PATRIOTS’, are holding our collective breathe to see how it plays out.

In the meantime, ….it is reported that more than 2000 are already at the border, with thousands upon thousands on their way. At our border, laughing at us while making demands and waving foreign flags… flags from the Country they ARE FLEEING. – see link below.

We have our military putting up razor wire but no clear directive of what their role will be.

We have the bias, lying, anti-American media lying to its watchers about what is in play and about those at the border who plan to play games or simply break through. (One would think these watchers would be upset that they 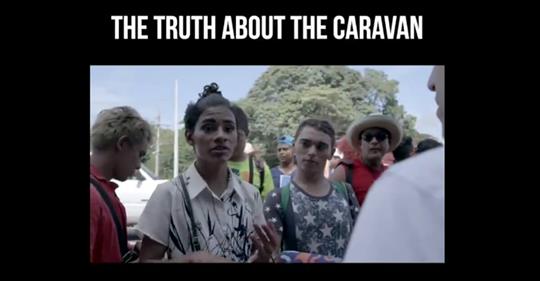 are being LIED TO).

We know from reporting - that the images of women and baby strollers is just yet ANOTHER bias incorrect, media agenda narrative that is just not true.

We have Groups and Individuals at the border either protecting it or reporting on the lawlessness in play and We THANK EVERYONE doing what they are - to promote lawfulness and keeping us up-to-date.

We have Mexicans (won’t hear on the news) growing more and more angry with the invasion there/coming here with reports of fights etc. breaking out. They do not want them either!!!

We hear that current DHS Secretary may be replaced (about time) but no clarification on this either. Actually, we hear NOTHING/little to nothing from our Politicians on this current ORGANIZED INVASION and what they are GOING TO DO ABOUT IT!

We know Mexico offered these people asylum – asylum they have refused and instead will play the games here or enter illegally (some already have) claiming JOBS. Meaning that NONE playing these game players should be allowed admittance.

As we wait and watch - wondering if our laws will be enforced and these soon-to-be illegal aliens will be DENIED entrance, we know that thousands upon thousands will follow if this is not STOPPED NOW!!!!

All eyes on THE PRESIDENT……….. will keep you updated. 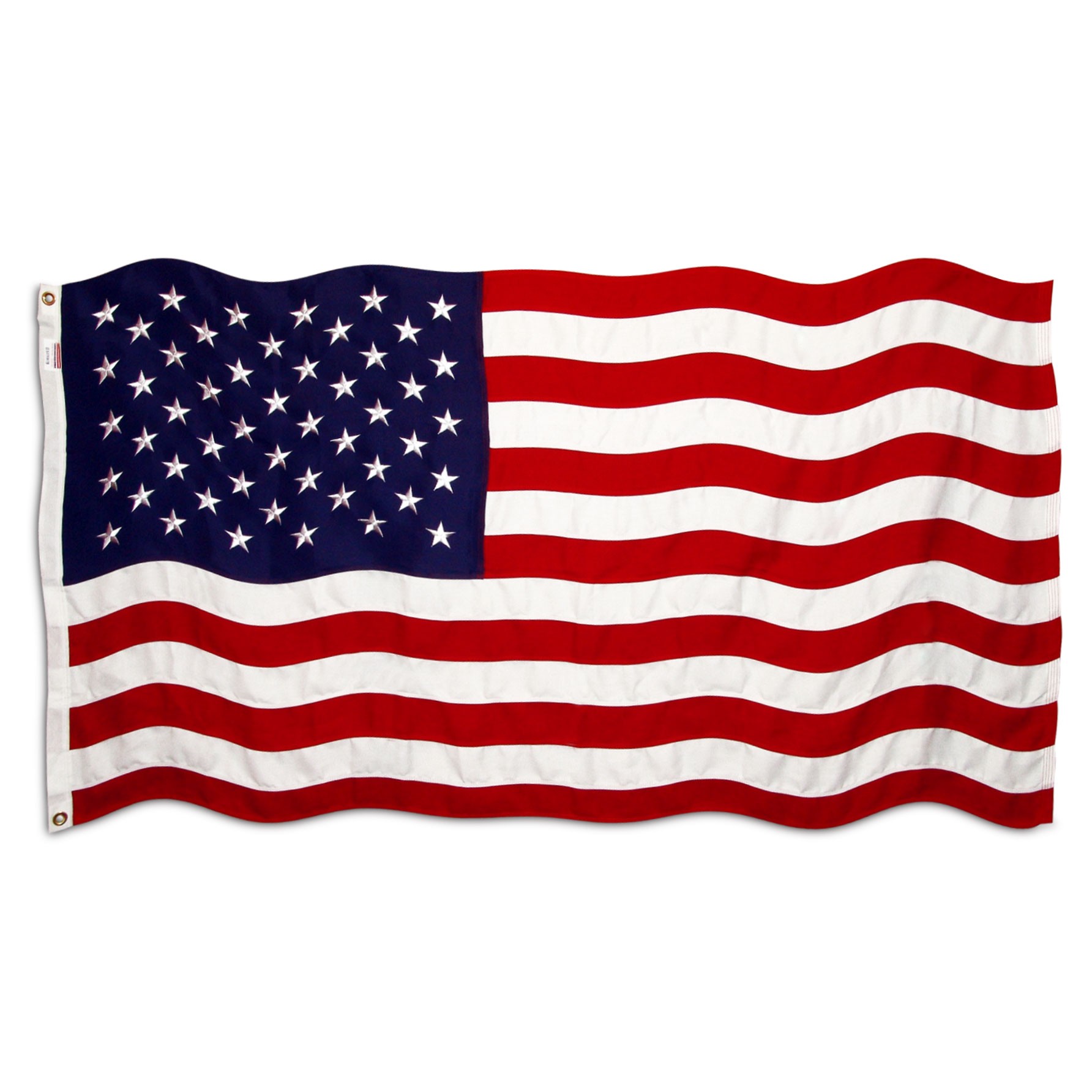 With all the talk about Nationalism and watching people disrespecting and burning OUR FLAG…. Here is a short clip  - 4 minutes only – that puts it back into respect.

Please Watch. ABSOLUTELY worth four minutes of your time.

Thank you, Greg for reminding me of this. 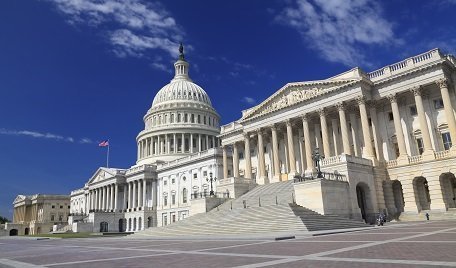 Today the ‘Lame Duck’ Session resumes…. And IF those We elected to office were wise….. (if they were) they would get down to business and address several pending issues before Pelosi or whomever takes the gavel in January. Issues like building and funding the wall, birthright citizenship, those illegally present in the Country, etc.

BUT just as wise as it would be to get down to business, we also have those who will work against the will of the people like…. those having their pockets filled via big business - right Paul Ryan?

Already talk of a DACA or Dreamer amnesty is peculating quietly – funny though the ‘Devil in the Details’ like how far some treasonous amnesty would trail and how many would be rewarded for their lawlessness, well…. that is never discussed… eg: family members etc. NO AMNESTY!!!

ALSO, Congress will need to discuss funding the DHS, Justice, State and Trans Depts etc. by December 8th to avoid a shutdown as this article states.

Stay engaged and alert – if I had to guess… I believe that many on both sides of the isle understand the importance of addressing issues now – rather than later.

SILVER LINING – We only have two months left of the Paul Ryan.

Why is it that the politicians and Anti 2nd Amendment individuals rant and rave over gun violence but refuse to have the same position with the lost of life and crimes via illegal immigration?  APPARENTLY, those Americans/Loved Ones…. who have been lost due to the open borders/Let’s Get Voters and Cheap Labor agenda – just aren’t as important – right?

ANSWER: Because it is by their wishes and designs to disarm Americans while flooding the Nation with uneducated and poor individuals who – for the most part – will follow their anti-gun positions. Those who will vote for them in the future and work for peanuts while demanding assistance from the taxpayers.

The Left will combat my post with “Not EVERY ILLEGAL IS DANGEROUS OR A CRIMINAL…. to which I reply… “Not EVERY LAW-ABIDING GUN OWNER IS MENTALLY DERANGED OR A NUT JOB EITHER!!!” Punishing law abiding gun owners will have ZERO effect on those who could care less about ‘The Rule of Law’ – ask an illegal.  It just is more of the globalist political pandering that we see day in and day out.

And, just look at the cache of weapons confiscated in Mexico (link below) You Know…. Just over that unsecured southern border – does Fast and Furious pop into your minds? Of course, some will blame the U.S. BUT instead of the blame game – SECURE THE BORDER Build the Wall and stop the nonsense.

ENDING gun violence is commendable via addressing mental illness, education and maybe by tuning now the rhetoric in this Nation but - so would be stopping illegal immigration entry and crime – something that could be prevented if only our laws were enforced.

What say you Nancy Pelosi?

Now on to the Supreme Court where…. ’The Justices’ should decide that what was created via a memo (refrig. magnet memo kind of stuff) by one President can be eliminated by another – President Trump.

Jeff Sessions is out! …and that Donald Trump is our PRESIDENT!!!

The President got into it again today with Acosta from CNN regarding the caravan. 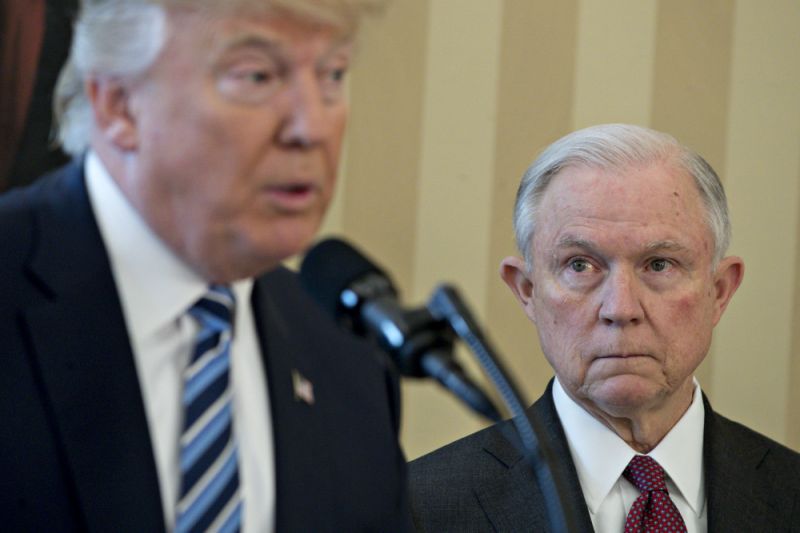